Attacks in Absolver are covered on this page. Attacks are the various moves that you will place into your Combat Deck for use in sequences. All attacks have a starting and and ending stance, this determinantes the positions at which a move is available and the moves that can follow it up. It is recommended to visit the Combat and Combat Deck pages in addition to this one to better understand the concepts hereby explained.

Each move has a movement type and a target area, these influence the way the move interacts with certain moves with special properties and certain defensive abilities. The different target areas are high, low and mid, while the different movement types are: vertical, thrust and horizontal. Things to be noted are that vertical attacks act the same way as mid thrusts with the only exception of back stagger being stopped by mid thrusts but not by verticals and that horizontal attacks also physically have a wider area coverage, making them effective against badly timed manual dodges.

In addition to this, with only a couple of exceptions to be had, attacks hit from one side, meaning that the Forsaken class ability and moves with the parrying property will only parry the attack if the input/parry side coincides with the one from which the attack hits.

Some moves have special properties that give them special effects or allow them to avoid specific attacks:

New attacks are learned when you block, dodge or use your defensive ability against them, with the last one being the fastest method. Keep in mind you have to kill the enemy from which you are learning in order to gain the experience for each attack. Getting killed or running away from a fight will lose all the experience you gained fighting this particular enemy. By joining a school you get access to the school's deck and style, using the attacks in the deck will allow you to learn them, succesfuly using the new style wil earn you progress towards unlocking it. You can leave a school and retain all the preogress on the moves/styles you were unlocking. You won't however retain them unless you fully learn them.

In fighting games time is often measured in frames, with every frame being 1 / (frame rate) of a second. In many games, including Absolver, 30 frames per second is the standard upon which frames are measured, meaning a frame in Absolver is 1/30 of a second or approximately 33 milliseconds.

The total time any move takes to complete is usually divided in three parts, this applies mainly for attacks, but also for powers and defensive abilities:

As mentioned previously, when getting hit by an attack the receiving player enters one of two states where they are technically unable to do anything: blockstun, if the player was guarding when the hit was taken and hitstun, if they were not. It is important to mention that for most moves, hitstun usually last for much longer than blockstun, making taking actions after being hit much more disadvantageous than doing so after blocking a hit. In Absolver hitstun can be cancelled into block unless the player is guardbroken, meaning that breaking the opponent's guard is the only way to create true combos.

When one character attacks another, the time difference between the moment the aggressor recovers from their move and the receiver recovers from either blockstun or hitstun is called frame advantage and has great impact in combat, as, if both characters were to take the same action afterwards, the fastest recovering one would execute it first.

When using an attack it is possible to cancel a part of the recovery and transition into another almost immediately after the hit occurs. This is called Perfect attack in game, but has been given the name of Gold-linking by the community, as the characters flash gold when linking moves using this technique.

Whenever an attack is made, two horizontal lines advance along the stamina bar and two triangles point towards a point of it. To execute a goldlink players must input the next attack roughly at the point where the two lines coincide with the location the triangles are pointing. Doing so will cancel the last 4 frames of the recovery of the move and transition immediately into the next one. 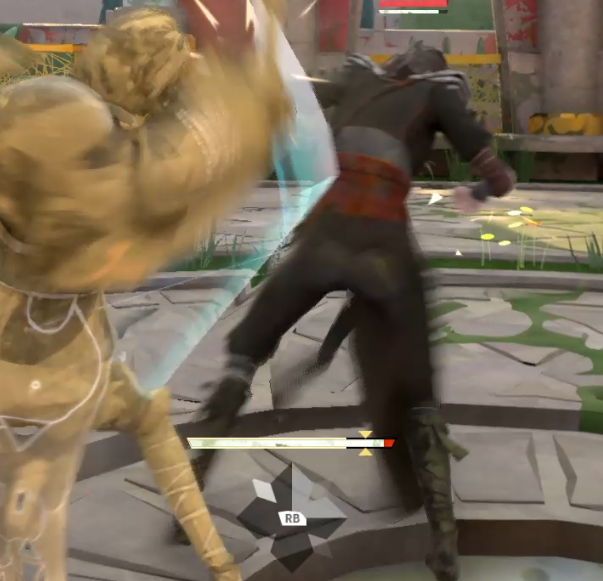